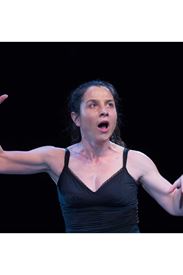 Irena Z. Tomažin is a Slovenian performer, choreographer and a voice teacher. The (heart)core of her work is the voice in it’s various existence. Starting out her dance education from the urge to move and release inner tensions and inspirations, her performance practice has since then shifted towards the investigation around the embodied voice. Her voice work is always physical, connected with body, gesture/dance and space, but at the same time is very orientated on the sound textures of the voice. Her practise manifests in the form of thoughts, songs, spoken word events and experimental concerts, as well as through directing dance and theatre work. Sometimes it rises from the encounter and collaboration with other artists, other times from being alone, making space for listening to what is outside and inside.

In the last 20 years, next to collaborating with other artists and performing in different dance and theatre productions, Irena has created a series of voice and movement solos and duets and group pieces: Hitchcock’s Metamorphoses with composer Mitja Reichenberg (2001), Caprice (2005) , Caprice (re)lapsed (2006), Like a raindrop into the mouth of silence (2008), Out of discord with Berlin based dancer Josephine Evrard (2010), Taste of silence always resonates(2012). The latter was awarded from audience and jury for the prize of best performance on the International Gibanica Festival/Ljubljana. In 2015 she made an audio-visual installation Faces of voices / noise from which derived next dance solo Body of Voice. Her last piece Moved by voice (2017) is again based in voice and movement as quartet for four women. Whatever she has created till now feels somehow unfinished, and opens up more questions and directions of research that she keeps investigating.

As an experimental voice artist she is involved in the European scene of improvised music and has ongoing collaborations with some of the world's most renowned improvisers (Michael Zerang, Okkyung Lee, Christof Kurcmann, Seijiro Murajama, Xavier Charles, Lee Patterson, Liz Allbee, Ilya Belorukov, Tomaž Grom, Jonas Kocher, Gudenz Badrutt, Orchestra 33 1/3 and with composer Matej Bonin…) She has released two solo albums Crying Games and Taste of Silence and a duo album Ljubljana-Wien with Christof Kurzmann. She is a member of a cult electronic-industrial band Borghesia and has released two albums with them: And Man Created God, Proti Kapitulaciji; and a member of international Šalter Ensemble.

As a teacher, Irena shares her work regularly teaching workshops in Europe.