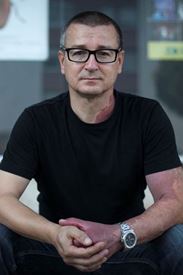 Choreographer, dancer and stage director Matjaž Farič studied dance at the ballet school in Maribor and at Palucca Schule in Dresden and graduated from the Academy of Theatre, Radio Film and Television in Ljubljana. He began his artistic career during the 1980s. As a choreographer and stage director he created more than forty dance and theatre performances in Slovenia and abroad and four solo dance performances. His most renowned dance creations are Rdeči alarm, Solo, Stravinski i ja, Klon, From the desert Through the Forest, Otok, Terminal, Srh, Rdeča-sled and re-interpretation of canonical ballet works titled Trilogy – Swan Lake, Romeo and Juliet, The Rite of Spring. Internationally he worked with companies such as Bitef Dance Company from Belgrade, Studio for contemporary dance in Zagreb, Diversions Dance Company from Cardiff and Compagnie Coline from Istres. As a lecturer he occasionally worked at the artistic high school and the Academy of Dance in Ljubljana and with the School for Contemporary Dance Ana Maletić from Zagreb. His most renowned directions are performances such as Veter, pesek in zvezde, Macbeth, Pes, noč in nož, Grozljiva lepota, Hamlet, Škrat Kuzma and Guliverjeva potovanja. He worked with other directors and created choreographies for theatre and opera performances.  He is a recipient of many Slovenian and international awards such as the Prešern Award, Zupančič Award, the Golden Stick, Borštnik Award, 10th Ballet Competition NDR, Golden Wreath at the MES Festival in Sarajevo and Prix d’auteur at Rencontres chorégraphiques internationales de Seine-Saint-Denis. Matjaž Farič is the artistic director of the Flota Institute and the international dance festival Front@ in Murska Sobota.