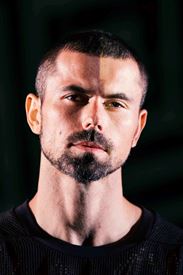 Working in Wroclaw, at Polish National Theatre inspired him to continue his professional dance education. He received exceptional scholarship from major of Wroclaw for his studies abroad. He graduated from the CODARTS – Rotterdam Dance Academy in 2007. During the time of studies he received significant scholarship from the Academy  – Corrie Hartong found.  After finishing the studies at the academy Michal began to teach at this prestige academy as a guest teacher and choreographer. During his stay in the Netherlands he worked with numerous well known choreographers such as Ed Wubbe, Andre Gingras, Guy Weizman and Roni Haver,  and companies like Scapino Ballet Rotterdam.

His first solo project “Dream of Electric Sheep” was presented at the Royal Opera House in London and at iTs Festival in Amsterdam. Moreover, he created the duo “Switched”, which was performed at Lucent Theatre under the organisation of Netherlands Dans Theatre. He was endorsed by some of the large production houses such as Korzo Theatre Den Haag and Theater Lantaren Venster Rotterdam. These two theatres produced his first performances “Made in Rotterdam”, as well as dance productions “Dust in the Wind” and “The Myth”.

He has been living and working in Slovenia since 2009. Together with Nastja Bremec he has created the Slovene-Polish duo known as MN Dance Company and developing their own, unique way of expression called “Contemporary Fusion”.

Michal was invited  by Irek Mukhamedov to choreograph for the Slovene National Theatre Opera and Ballet of Ljubljana and closely collaborate with the Slovene National Theatre of Nova Gorica as movement director or choreographer on multiple occasions. As artistic director and choreographer Michal is mainly focused on creating full-length dance performance hosted by Slovenia and European theatres.The last projects “Labyrinth” ,”S/HE” , “Conspiracy of Silence” and “Urban Tales” have received outstanding reviews and MN Dance Company is getting more interest world wide by dancers and spectators.