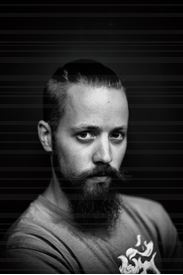 Tamás Tuza (1990) is a Hungarian dancer who finished the programme at the Budapest Dance School and upgraded his knowledge in numerous workshops with Nigel Charnock, Andrea Boll, Julyen Hamilton, David Zambrano and others. After over 20 shows, he joined the EnKnap Group in the beginning of 2010, where he danced and created until 2016. In this period, he cooperated with Slovene authors such as Sebastijan Horvat, Matjaž Zupančič, Rosana Hribar, Gregor Luštek and foreign choreographers such as Simone Sandroni, Club Guy and Roni, David Zambrano, Jordi Casanovas etc. He also danced in the Iztok Kovač’s hit, which received the Župančič award. During the past six years, Tamas travelled a great part of Slovenia and Europe with EKG.

Ground Eagle is a dance technique class that includes exercises for strengthening the centre – ‘power house’, which softens joints and expands our wings. In the first part, I concentrate on relaxing the mind and the body, to recharge them with the strength for flying. This is followed by demanding technical exercises where I focus on balance, position and precision. In the final dance combination, I want to create conditions where we fly within and complete our day in the sky, while still standing with both feet on the ground.