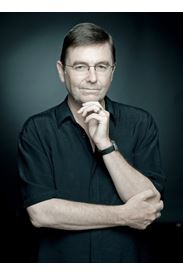 The respected English conductor Simon Robinson was born in Liverpool. He graduated from the University of Surrey in 1978 and received his Master's degree 1991 from the same institution. While still in England, he was a conducting student of Maurice Handford and Vernon Handley and later with Boris Švara and Oskar Danon. Originally engaged as a repetiteur and assistant conductor for the opera in Maribor (then Yugoslavia), Simon Robinson went on to become their principal conductor and has continued his association with that institution for the past thirty years. His close association with this musical institution and others in what is now the country of Slovenia has continued to grow. Since 1978, he has held a number of appointments as conductor and guest conductor with various orchestras, opera houses, and choirs throughout Europe including the Slovene Philharmonic Orchestra, Belgrade Symphony Orchestra, Royal Liverpool Philharmonic Orchestra, English National Opera North, Scottish Ballet, Prague Radio Orchestra and others. His opera repertoire is vast and includes the usual standard works, which are the staple of any opera house. In fact, he has been recognized as one who can step onto the podium at the last minute, without little if any rehearsal, and those performances have always garnered positive recognition by the press as well as by the opera house managements. Equally versed in symphonic repertoire, he has worked with many notable orchestras and is more than capable of holding his own against many, internationally recognized conductors. Christa Holler, who often reviews for a number of well-known European publications (the particular article appeared in Vienna’s Die Presse), once likened Simon Robinson’s performance of Mozart (which she heard from him in performance in Kiev) to that of Nikolaus Harnoncourt. Simon Robinson has an impressive discography that encompasses a number of well-known orchestral works, some with international soloists, and discs that also feature music by Slovenian composers. Simon Robinson has also been recognized for his advancement of Slovenian composers with a number of commendations including the Gold Gallus Medal for services to Slovene music in 1999, the Glazer Prize, Maribor for Excellence in Music in Slovenia in 1997 and the Rector’s Prize from the University of Maribor 1997 for "The furtherance of the Art of Slovene Music.” He was bestowed his most important award by Her Majesty Queen Elizabeth II on October 20, 1998. He was "Granted the Dignity of an Ordinary Officer of the Civil Division of the Order of the British Empire.”